In the 1970s Abidjan, the economic capital of Côte d’Ivoïre, emerged as the commercial centre of French-speaking West Africa. All kinds of music could be found in Abidjan. Afro-Cuban records for the older generation, zouk and reggae for the young. Goumbe, the earliest form of urban music, was played by groups in the poorer suburbs of Trechville and Adjame. Jùjú and fuji records were imported directly from Nigeria by Yoruba merchants and record stores sold music from the whole of French-speaking Africa.

The ethnic composition of Côte d’Ivoïre almost invites this variety. To the north people speak Malinké and Dioula. Malinké is also widely spoken in Guinea and both are related to Bambara in Mali. The country plays host to a large number of Mossi people from Burkina Faso, and in the south-east people belong to the Akan-speaking group, the dominant family of languages in neighbouring Ghana. As in the rest of French-speaking West Africa Congolese music have always been very popular.  From a modest beginning in the 1960s the record industry boomed in the 1970s and 1980s creating an upsurge in the development of the country’s own musical styles, notably that of the Bété people living in the central western part of Côte d’Ivoïre with traditional music adapted for the modern dance-band by Amedée Pierre, and even more successfully by Ernesto Djedje into the ziglibithy.

Ernesto Djedje in the studio ajusting the controls

Bands from Guinea, Mali, Burkina Faso, Bénin and Congo frequently visited Abidjan for concerts and recordings. Les Ambassadeurs with solo guitarist Kanté Manfila and Salif Keïta as lead vocalist moved from Bamako to Abidjan in 1978. That same year Sam Mangwana teamed up with guitarists Dizzy Mandjekou and Lokassa Ya M’Bongo and percussionist Ringo Moya Lotula to form l’Afrcan All Stars, tree members from Tabu Ley et l’Afrisa International who had defected in Abidjan on a tour of West Africa.

Most of the records labels in Abidjan were run by enterprising merchants who owned a record store. In the 1950s labels based in France such as Philips, Fiesta (a Decca France sub-label), Africavox, Vogue and Le Chant du Monde had released 78 rpm shellacs with West African artists. Local labels were set up with the introduction of the 45 rpm vinyl disc in the 1960s. Among the pioneers was Safie Deen who initially worked in collaboration with Philips but eventually established his own label. Other early vinyl labels were Djima Records with its sub-label Afriphone and L.G.V.D. Record. See discographies at Radio Africa Link. These labels were followed by Sacodis, Badmos, Papa-Disco and S.I.D. In 1975 S.I.D. (Societé Ivorienne du Disques) started a pressing-plant in Abidjan, initially for 45 rpm vinyl discs and by 1977 also for 30 cm vinyl albums. The plant was the second to open in French-speaking West Africa; the first being the SATEL pressing-plant in Cotonou, Bénin that had started a couple of years earlier.

By the late 1970s the preferred format for new releases had changed from the 45 rpm vinyl disc to the 30 cm vinyl albums.  By the mid-1980 the only new releases on 45 rpm were the 30 cm maxi singles (in French “45 T géant”).  The change came at a time of economic growth and rising affluence in French-speaking West Africa. In 1983 the number of local record producers and labels and had grown to around 75. Many only released a few albums and relied on the major producers and their record stores to handle wholesale distribution. The major producers such as Disco Stock, Sacodis, Badmos, Papa-Disco, Shakara Music, Disc-Orient and Maïkano organized their own distribution or entered into partnerships or licencing deals with labels in France and the U.S.A. Many albums recorded in Abidjan with Congolese artists were licensed by Polygram for re-release in Kenya. Both Sacodis and above all Disco Stock licenced albums recorded by other labels in Abidjan as well and by labels in Mali, Senegal, Ghana, Congo and Cuba for a wider West African distribution.

In the beginning recordings were made in mono in improvised studios or at the studio at RTI (Radiodiffusion-Télévision Ivoirienne). As demand grew for stereo recordings and a better produced sound, producers sent bands to record in the O.TO.DI. studio in Lomé, Togo, the STRACKS studio run by SATEL in Cotonou, Bénin or the EMI Studio in Lagos, Nigeria. The conditions improved significantly in Abidjan in 1982 when Jacques Bizollon opened the 8 track studio JBZ and instantly became a must have for producers in Abidjan.

Among the major labels Disco Stock had the most ambitious international business strategy. Founded by Daniel Cuxac in 1979 he focused from the outset on the local as well as the international market with distribution in France, and in the USA in a partnership with Rodger Francis’ Makossa label and his African Records Centre Stores in Brooklyn, Manhattan and Washington D.C.  The Disco Stock catalogue not only featured independent releases but also licenced albums from other producers in Abidjan, Editions Vévé and Tchi Tchi Tchi in Congo. It presented artists from Côte d’Ivoire, Senegal, Mali, Ghana, Bénin, Cameroon, Congo Brazzaville and D.R. Congo. When Fonior / Decca France was declared bankrupt in 1980 it left both O.K. Jazz and Tabu Ley without an international distributor. After a visit in 1980 to Abidjan by Franco Luambo Makiadi et le T.P. O.K. Jazz Daniel Cuxac secured the rights to release O.K. Jazz’s first original album series for the international market V.I.S.A. 1980 and Edipop Production. A similar deal was struck with Tabu Ley and resulted in the albums Tabu Ley à Abidjan Vol. 1 – 8. The tracks featured on the Disco Stock albums were still released in Congo on 45 rpm discs but the format was no longer saleable in West Africa, Europe or North America.

Daniel Cuxac interview – Part 2
00:00 Recording of the first Baobab albums in Dakar
01:35 Latin music sung in Woluf – going back to roots
04:05 The French speaking countries – Abidjan
05:35 The development of the music industry
06:35 1975 S.I.D. started – Yoruba producers – 75 producers in 1983
07:30 5 major companies – Disco Stock released 125 albums in 3 years
08:00 How Disco Stock became the leading company – It began in Dakar
10:00 Started 1974 in Abidjan with import of Latin music and disco imported from New York
12:00 First shop in Adjame
13:05 First production with Dexter Johnson sold 8,000 copies
14:40 Met and produced Franco in 1980
15:45 Disco Stock’s international distribution network
16:55 Daniels Cuxac’s dream for the future of African music
20:50 Local bankers do not understand the music industry
22:20 The major artists are still in Africa – In Paris the music is changed
23:55 How not to run a label in Abidjan
25:00 How to work with African musicians
28:15 Joint ventures with international partners preferred
29:30 All Disco Stock’s albums produced without financial backing
30:40

Daniel Cuxac interview – Part 4
00:00 How new albums are selected for release
02:20 Selection criteria
03:35 Re-releases of old records do not sell
05:45 Bebe Manga a hit in New York
06:30 What kind of music sells in different parts of Africa
08:01 Preference of African music in Europe and the USA
09:35 Where are albums recorded?
10:25 Franco and Tabu Ley Rochereau albums recorded in Congo (Zaïre)  – recent albums in Belgium and Paris
12:25 Royalties paid to artists – percentages and agreements
14:15 Piracy problems with illegally produced cassettes
18:00 Why people prefer piracy cassettes
19:30 Authors’ rights in the USA, in French speaking Africa and in France
22:05 Public use of music in stores, radio, TV and shows
25:25

The interview with Catherine Oro Loudes, director of the S.I.D.
(Societé Ivorienne du Disques) label and pressing-plant,
was recorded in Abidjan on 10th August 1983 – 3 parts 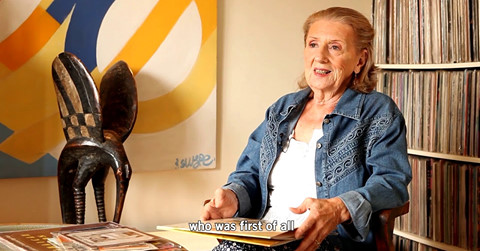