The Black Beats was formed in 1952 by trumpeter King Bruce (1922-1998) and tenor saxophonist Saka Acquaye. In contrast to other Ghanaian bands at the time that played instrumental dance music, the Black Beats emphasised the vocal part. Combined with good dance-band music this proved to be a highly successful formula in spite of the fact that the band was made up from part-time musicians. During the 1950s and early 1960s the Black Beats released a string of highlife hits and rivalled the popularity of E.T. Mensah and his Tempos Band. Between 1952 and 1964 the band released more than 50 78 rpm shellac records on the major labels of the day His Master’s Voice, Philips/Fontana, Senafone and Decca.

After nine musicians left the Black Beats in 1961 to form The Ramblers, bandleader King Bruce managed to reorganize a second-generation Black Beats and record more hits for Decca. In the process King Bruce also switched from playing the trumpet to alto saxophone. However, his career in  the civil service caught up with him in 1968 when he was forced to give up playing in public, but he continued as manager of the Black Beats and seven other bands. 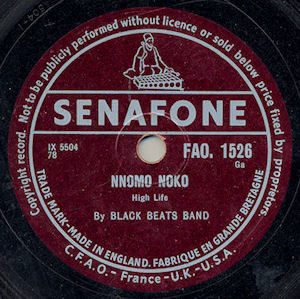