As early as 1907 the Gramophone Company in London recorded a group of Swazi chiefs from South Africa on a visit to England. The label Gramophone Company Record was later known as His Master’s Voice after its logo with Nipper, the dog listening to the voice of his master from a gramophone record. In 1903 the Gramophone Company had acquired the European and British Commonwealth assets of the American Zonophone label based in the United States.

The first African releases in the general overseas 3000 series came in 1922 with recordings in Yoruba by Fela Kuti’s grandfather, the Reverend Canon J.J. Ransome-Kuti when he was visiting London. The recordings in Yoruba were supplemented by the re-release of recordings by C.A.W. Pratt (alias Shotayo Adeyemi) that had been released previously in 1911 by His Master’s Voice. Further recordings were made in London with other African artists between 1923 and 1930 and added to the 3000 as well as the 4000 series.

Zonophone E.Z. series
In 1927 Zonophone introduced the E.Z. series, the first series released by a major European label exclusively for African recordings. It ran from E.Z. 1 to E.Z. 574 and included recordings made up to 1930 (plus 2 further releases with speeches added in the mid-1930s). The E.Z. series comprised recordings in several West African languages including Abonnema, Anecho, Appolonian, Ashanti, Beni, Creole, Efik, “Coast English”, Ewe, Fanti, Ga, Hausa, Ibo, Jerkri, Jolof, Kroo, Mendi, Sobo, Temni, Twi, Vai and Yoruba, in addition to recordings in Duala, “Congo”, Swahili and Somali. The recordings were made with Africans visiting or living in England at the time. Many had religious topics and would not today be considered popular music.

The commercial strategy behind the E.Z. series would appear to establish a catalogue that included as many African languages as possible in order to create a potential market for the sale of gramophones. As the early name The Gramophone & Typewriter Ltd. implies, the company – like other record early companies – was just as much a gramophone manufacturer as a record label. The shellacs could likewise be seen as a means to an end, to sell gramophones.

The Kumasi Trio
The E.Z. series relied on recordings of gifted amateurs visiting or living in England at the time. Although the recordings gave them some notoriety they were not necessarily the best known artists locally. So in 1928 Zonophone’s retail representative in the Gold Coast, the Tarquah Trading Company, subsidized the first trip for West African artists to go to London to be recorded, the famous session organized for The Kumasi Trio led by Kwame Asare, called “Sam”, “Jacob Sam” or Kwamin when recording in Twi, which took place in June 1928. The recording session was deemed so special it was released exclusively in a new E.Z. 1000 series. A similar travel was organized by Zonophone’s retail representative in South Africa for Ruben Tholakele Caluza’s Double Quartet to go to London in 1930 where they recorded 150 songs for Zonophone’s 4000 South African series.

These recording sessions in London, however, should be the exception. Instead, the labels that a few years later merged to form the Electrical and Musical Industries, Ltd. (EMI) in March 1931 began to send recording teams to Africa in order to acquire a comprehensive catalogue of local artists.

Recordings in Africa
In 1928 His Master’s Voice’s branch in Bombay, India (today Mumbay) dispatched a recording engineer to Mombasa, Kenya on the first of several recording tours. The British Columbia label and the German Carl Lindström label Odeon both started recording in East Africa in 1930. The Odeon recordings also included Madagascar. The French Pathé label sailed its East African artists to Marseille to be recorded. Odeon had already begun recording in Nigeria in 1929 and in 1931 the Carl Lindström Company also went to the Gold Coast. But these recording tours only lasted for a couple of years until the formation of EMI.

The Great Depression and international financial crises that followed the Wall Street crash in 1929 caused a 80% drop in record sales. In response the British Gramophone Company and the American Columbia Graphophone Company formed EMI. The merger also included the German Carl Lindström Company (including the Odeon and Parlophon labels), Columbia in the USA and Pathé in France. This in turn resulted in a reorganization of the African record market. The various region were divided between EMI’s labels to avoid they competed against each other. Zonophone’s African catalogue was terminated and deemed obsolete. The only exception was the recordings with Caluza’s Double Quartet which were re-released on His Master’s Voice in the G.U. series for the South African market.

A selection of the Gold Coast recordings made in the early 1930s by the Carl Lindström Company for its Odeon and Parlophon labels were re-released in part on EMI’s Parlophone label in the UTC 1-94 series in 1936 and the 1001-1033 series in 1939. The UTC prefix indicated the wholesale trading company for whom the series was manufactured, The Union Trading Company of Basel. Two UTC series with new recordings were released after WWII. Similarly German Parlophon’s recordings with Nigerian artists were re-released c.1936 by British Parlophone in a series that ran from PO 500 to 645.
After the merger EMI initiated its own recordings in Lagos and Accra in 1937 for release on its principal West Africa J.Z. series on the His Master’s Voice label. The series began with J.Z .1 and ended with J.Z. 311. New releases were halted at the outbreak of World War II. The inclusion of recordings with the Gold Coast Police Band, made in London during their tour of England in May-August 1947, and a jump in matrix numbers indicate the remaining 1937 recordings from J.Z. 262 onwards were released after the war in the late 1940s. In parallel to the J.Z. series, a short-lived His Master’s Voice J.L. series recorded in 1942 reached 39 releases. 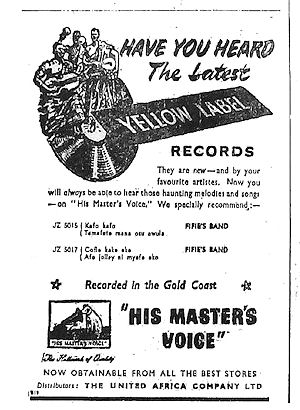 It took until 1950 before EMI resumed recordings after World War II on location in West Africa. His Master’s Voice J.Z. series was re-launched with a new J.Z. 5000 series. During the 1950s His Master’s Voice as well as the Parlophone, Columbia and Odeon labels launched more than 45 new series, many produced for special retail distributors in West Africa following the model initiated with the UTC series. The individual series were identified – not by the name of the label – but rather by the prefix of the catalogue number made up by two to three letters followed by numerals (see list below). Recording sheets in the EMI archive with 0AB matrix numbers indicate the number of recorded tracks between 1950 and 1960 amount to 2.182 shellac discs alone in this matrix series. The total number of shellac discs released by EMI would appear be to be several hundred greater.

The late 1950s, when independence drew ever nearer for the British colonies in West Africa, also marked a change in format from shellac to vinyl discs. Rather than invest in new equipment EMI instead chose – except for Nigeria and South Africa – to withdraw from the African marked and terminated all its shellac series. The last recordings dates to 1961, but given the number of gramophones for 78 rpm discs sold to consumers in West Africa over the past decades, shellac discs were still popular a good while into the 1960s.

Re-releases
Hardly any of the West African recordings originally released on shellac discs on the Parlophone, His Master’s Voice,  Columbia and Odeon labels have been re-released on vinyl at a later date. A selection of 16 tracks was released in 1984 on a compilation LP album Juju Roots 1930s-1950s (Rounder Records 5017) as a spin-off from Christopher A. Waterman’s research for his 1986 Ph.D. dissertation that again formed the basis for his book Jùjú. A Social History and Ethnography of an African Popular Music (University of Chicago Press, 1990). Two compilation CDs have emerged in later years on the Savannahphone label Popular Music in Yorubaland 1931-1952 (AFCD 010) from 2006 and Delta Dadies. Dance-Bands in Nigeria 1936-1941 (AFCD 011) released in 2008.

In contrast, the Zonophone recordings from the late 1920s have been well documented by Paul Vernon on 6 CDs released by the Heritage label, including the famous session organized for The Kumasi Trio in London in June 1928 (HT CD 16, 17, 18, 22, 28 & 33). In 2008 Honest Jon’s Records released a further 7th compilation CD based on the Zonophone recordings Living Is Hard. West African Music in Britain, 1927-1929 (HJRCD33). In 2001 Serena Owusua Dankwa and Viet Arlt initiated a compilation CD Ghana Popular Music 1931-1957 released by Arion (ARN 64564) based on the recordings made in the Gold Coast by The Union Trading Company of Basel for the Parlophone label.