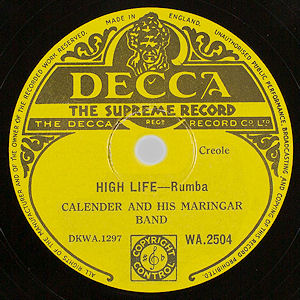 By 1956 Decca had built a recording studio in Winneba, Ghana and twice a year two recording engineers was sent to Yaba in Lagos, Nigeria to record on a portable machine. Ghana remained the main focus for Decca’s activities until the early 1970s when the company’s West African branch was relocated to Lagos, Nigeria

During the 1950s the Decca catalogue featured many of the most popular West African artists including E.T. Mensah and his Tempos Band, The Black Beats, Melody Aces, The Ramblers Dance Band and The Stargazers Dance Band. The decade stands out as the golden era of dance-band highlife with Decca as the most important label in the region.

Vinyl formats
The 45 rpm vinyl single play (SP) disc was introduced in 1959 with 45-WA 940. From 1961 all 45 rpm vinyl single play discs with artists from Ghana and Nigeria were released in the GWA 4000 and NWA 5000 series and given a “45” prefix. Until 1963-64 most new vinyl releases in the GWA and NWA series were also released on shellac with identical catalogue numbers.

Records manufactured in Nigeria and distributed by Decca’s West African branch were also released on the Star label in the SRN (SP), SREP (EP) and SRPS (LP) series for Haruna Ishola’s and I.K. Dairo’s Star Records. The Decca FN series (SP) was used for recordings made by Ghana Film Company, the Decca TPN series (SP) for releases made for the Ets. F-Gaz in Porto-Novo and the Decca TXP series (SP) for special releases for the Alofty Music Shop in Lagos. Licensed Congolese single play records from Fonior / Decca France’s Decca, African and Fiesta labels were re-released in the CD series on the Congo Decca label – later renamed Afric Decca. Similarly, Fonior / Decca France re-released a number of albums in France produced by Decca’s West African branch plus a number of other Nigerian labels.

Afrodisia Ltd.
The Nigerian indigenization decrees of 1972 and 1977 led to the gradual take-over of Decca (WA) Ltd. by Nigerian owners including Chief Moshood Abiola and band-leader-musician Ebenezer Obey. Beginning in 1976 the Decca label and the WAPS series was gradually replaced by the Afrodisia label and the DWAPS series. The last album in the WAPS series was released around 1983. Three new album (LP) labels were also introduced. Soundpoint in the SOP series, Blackspot in the B SPOT series and Deram in the DLPS series.

The indigenization of company ownership eventually severed the links to the international market. In combination with the change in format from vinyl to cassettes, new releases with Nigerian music have become increasingly more difficult to come by outside Nigeria since the 1990s than was the case from the 1950s into the 1980s.

Historical legacy
What is unique about Decca as a West African label is its longevity. Decca, unlike its UK rival EMI, stayed on when independence approached for the British colonies in Africa. Where EMI terminated all their shellac series across the continent and withdrew to two distribution companies based in Nigeria and South Africa primarily set up for re-releases of its international catalogue, Decca remained in the market. It managed the transition from the colonial period well into the post-independence era, the transition from shellac to vinyl and from the 45 rpm formats to the 30 cm album as the principal format for new releases. However, as a West African label it did not survive, be it the sale of the UK parent company to Polygram in 1980, the economic and political constrains it encountered in Ghana and Nigeria in the 1970s or the increasing numbers of illegally copied cassettes which flooded the market in the 1990s.
The current status of Afrodisia Ltd. is not known.